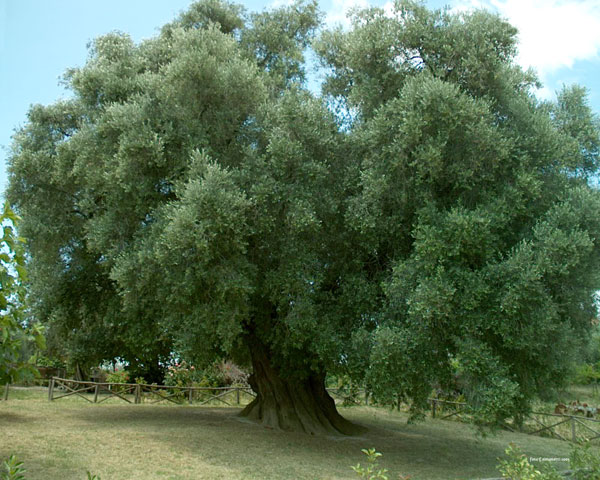 The olive tree of Canneto Sabino (the "Olivone") is a living witness to the long-term vocation of Sabina to the production of olive oil.

The tree, big, strong and flourishing, does not seem to feel the weight of years, but its longevity over two thousand years has also been confirmed by the "carbon-14" test.

It is assumed that the tree can be traced back even at the time of Numa Pompilius, King Of Rome from 715 BC until 673 BC, who was probably coming from the Sabine. Many ancient documents testify the traditional olive cultivation in Sabina:

The historian Strabo (63 BC-21 AD) in his work "Geography" writes "The whole ground of Sabina is extraordinarily rich in olive trees";

Varro (116 -27 BC), in his "De re rustica" describes still valid advices on the cultivation of olive trees, the olive harvesting and milling, such that it can now be defined "first production specification" for the Sabina olive oil;

The archaeological discovery of the flask of Poggio Sommavilla traced back to the seventh century BC, preserved at the Museum of Fine Arts in Boston, in addition to being the oldest example of Sabina writing of pre-Roman times, it is also the testimony of olive oil culture of the area as inside some remains of olive oil were found;

Claudius Galen (129 AD - 216 AD), the father of modern pharmacopoeia called the oil of Sabina as "the known world's best".

Since 1876, as it shows from the transcript notary, the Olivone was purchased by the Bertini family. It is certainly the progenitor of a large number of olive trees in Sabina, none of which, however, can equal its majesty and beauty: it is about fifty feet high with a trunk circumference, at 1 meter from the ground, of 7.2 meters and a diameter of the crown of about 30 meters. At the base of the trunk a cavity opens generating a real cave.

According to ancient records, its production reached 12 tons of olives with a yield of 150 kilograms of oil equivalent to a 'soma' (an old measure). The current production is lower because the pruning is more geared to take care of its aesthetics than of its productivity. 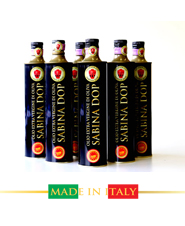